What started out as an extra stage at the Vans Warped Tour, has evolved into a tour that stands on its own. And with the Acoustic Basement Tour in the United Kingdom just around the corner, we felt we had to have a chat with its founder and producer Brian Marquis, who will be sharing the stage with Geoff Rickly, Koji and Rob Lynch.

It is the first time for the Acoustic Basement Tour outside the United States, but also your first time playing in Europe. That must be exciting.
"I d

o not know what exactly to expect but I have heard a lot of good things about touring the UK from friends. It feels good knowing that I have Geoff and Koji with me to guide me through the experience. We have all played the acoustic stage at the Warped Tour in the States as well as the first Acoustic Basement stand alone tour in February 2013."

"I have only been to London once briefly for vacation so I'm exciting to see the rest of the country and see what the shows are like. I expect to meet a lot of new people and try a lot of new things. I'm looking forward to the beer too!"

Is there a difference with the US tour?
"I don't think it will be that different though, as I will be bringing the same vibe and spirit that the stage has in the States to the UK. We know the intimacy and style of these shows quite well. We do however have Rob Lynch from the UK, and we will be bringing him to the States this summer for his first full US tour, so that's something new for this year to tie into Warped."

"This is kind of a test run of the tour and to keep it simple and concise we decided to just do a quick trip around the UK before festival season starts to help promote Warped UK in the fall during the off season. Hopefully the reception is good and we'll do it again and expand into mainland Europe next year!" 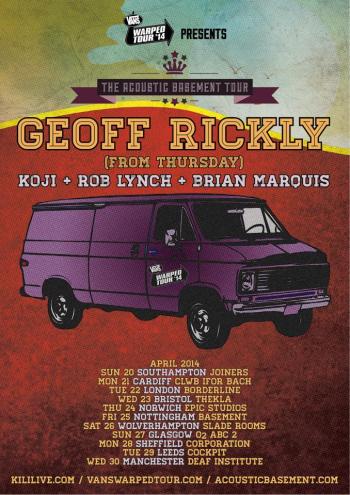 As the founder of this tour, what is it that makes acoustic music special to you?
"I grew up with a father who played acoustic guitar and harmonica. I was exposed to a lot of folk, blues and 70's singer-songwriters around the house and that started off my love and appreciation for music long before I got into grunge, punk, hardcore and metal when I was a teenager.

After Therefore I Am breaking up in 2010, I decided to get back to the simpler side of songwriting and went back to acoustic. There is just something raw and honest about its simplicity that I really gravitated towards at this point of my life. Being self reliant, with a guitar that needs no other equipment."