When you say Ducking Punches, you say Do It Yourself. I mean, the guy even wrote a song about it. The same goes for his new album, “Dance Before You Sleep“, which has been recorded, mixed and on hard copies within just two weeks. And you don’t have a label for the album? Why not do the first run on your own? Here’s our review of “Dance Before You Sleep”!

The whole D.I.Y. scene makes it possible for a lot of musicians to get their music out there really easy, and without any fear for lack of quality nowadays. High quality recordings is within reach for everyone, and “Dance Before You Sleep” is an excellent example for that.

There is one theme that already catches your eye from looking at the album title, cover and track list: death. However, even though every song is wrapped in this bitter matter, they do not feel that heavyhearted.
As he sings in Cursed Luck: “Cursed luck, bleeding gums / And I’ve got jabbed lips, two broken thumbs / Death looks down on me, shakes his head and he says I’m not taking you just yet, my son / ’cause there are many things you haven’t fucking done“. This stresses the album title, telling to you truly live before dying. 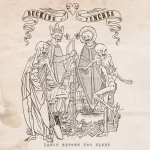 Another song that makes a strong impression is “Big Brown Pills from Lynn“. Before you know it, you are singing along with the somewhat tragic events described in the song, thanks to cleverly written lyrics and catchy rhythm and musical structure. Definitely one to climb the charts.

“Dance Before You Sleep” contains a lot of up tempo songs with a high amount of singalongs, but Ducking Punches proves he doesn’t need the whole band in “Potions and Powders” and “Six Years“. The latter is about a friend he has lost. A beautiful tribute that stands strong even when you take away the added instruments, mainly because of the emotion it shows.

Dan Allen has got a solid backing band since two years and uses his band as much as possible, which unfortunately puts his own guitar in the background sometimes. Regardless, “Dance Before You Sleep” is craving you to, as the title says indeed, dance before you sleep. Well composed, catchy, emotional; those terms can be added when describing Ducking Punches.

This entry was posted on Thursday, February 6th, 2014 at 6:00 AM and tagged with acoustic punk, Big brown pills from Lynn, Cursed Luck, Dan Allen, Dance Before You Sleep, Ducking Punches, Potions and Powders, Six Years and posted in Album Review, Reviews. You can follow any responses to this entry through the RSS 2.0 feed.
« New record Billy the Kid via XtraMile
Veara acoustic? »