Chris Farren to release 7-inch via own label

New Chris Farren songs are always welcome. The Fake Problems front man has announced a new 7-inch record with three new full-band solo songs. For more info and to listen to the title track of “Where U Are“, please read on.

“Where U Are” is the first release on Farren’s new label Boyfriend Island, that he will be running with his fiancée.  He explains to TIME: “We call it Boyfriend Island because the idea of the label is freedom in isolation, not really [being] bothered about what anyone outside of it might say or think. Just do it ’cause you like it.” 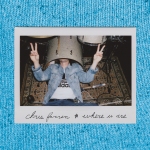 The songs were partially recorded whilst Farren was on the road, touring through Australia and New Zealand with The Gaslight Anthem, finishing the songs in hotel rooms, bathrooms and before and after shows. The advantage: getting Gaslight’s Brian Fallon to sing on one of the songs.

There will be 500 7-inch singles for “Where U Are”, available for shipping in June, but you can already pre-order it. You can also get the digital files from April 7 on through Farren’s BandCamp.

This entry was posted on Tuesday, March 31st, 2015 at 10:59 PM and tagged with 7-inch, Australia, Boyfriend Island, Brian Fallon, Chris Farren, Evaporate, Fake Problems, new EP, New Zealand, Permanent For Me, The Gaslight Anthem, TIME, Where U Are and posted in Music, News. You can follow any responses to this entry through the RSS 2.0 feed.
« Jeremy Enigk to record new album via pledge campaign
PJ Bond is “The Better Option” to stream now! »