The former Dead Letter Dept. front man has made quite a name for himself, but still lets his inner punk shine through, through his music. “Adventure Handbook” follows his much praised 2013 debut full length “Places To Die”, and is pretty much the result of the touring since that release.

Moir has been on the road almost every day, including a lengthy European tour on his bicycle where he cycled from gig to gig. “Adventure Handbook” describes all the things that you experience on tour through layers of punk, folk and poppy melodies. 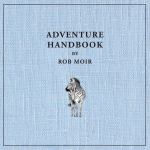 “Adventure Handbook” is out now through Underground Operations (CAN) and Make My Day Records (DE/EU).

This entry was posted on Friday, August 28th, 2015 at 11:48 AM and tagged with Adventure Handbook, Dead Letter Dept., Places to Die, Rob Moir and posted in Music, News. You can follow any responses to this entry through the RSS 2.0 feed.
« Northcote’s “Bitter End” is not the… bitter end
Brian Fallon announces solo album »