What way to better start the new year than with a sold out first show? Frank Turner & The Sleeping Souls descended to Utrecht for the first show of his European tour, and with two thousand people showing up, it’s the biggest club show the English troubadour has done in the Netherlands. So how was show #1808? Find out after the jump.

For support, Turner brought Xtra Mile label mates Will Varley and Skinny Lister, who also opened at the UK shows last fall. And while the venue is filling up, Varley’s difficult task of warming up the crowd starts. His songs consist of a dose of political views, humour and cleverly woven words that make Varley a great singer-songwriter. Unfortunately, although the crowd gets bigger, most of the people in the back do not really pay attention. It does not seem to bother Varley though – maybe he cannot hear them talking through his set.

Luckily, Skinny Lister plays a tad louder so there is no need to be bothered by others. The cheerful folk music of the London sextet gets the first people dancing and sing-alongs like the old shanty “John Kanaka” get the crowd in the mood for a party. So is the band, because front woman Lorna Thomas gets off stage during “Seventeen Summers” to waltz with whoever seems fit, and upright bass player Michael Camino crowdsurfs with his bass just after she returns on stage.

And then there is the calm before the storm. Slowly you can hear the rain set in, combined with the sound of a rolling thunder. The crowd is silent in anticipation until Turner walks on stage. Those that have listened well to Turner’s new album “Positive Songs For Negative People” can already guess the first song on the set list: “The Next Storm“.

After three songs the jovial front man takes a moment to address the crowd, expressing his thanks for everyone coming out to his first show of the year. The usual division of the crowd into team Tarrant (Anderson, bass player) and team Ben (Lloyd, guitar) gets the rivalry going which can outsing the other.

With the focus on his latest album, Turner still performs a lot of older songs; something clearly appreciated by the audience which is singing along almost every word (if not all) of “If Ever I Stray” and “Try This At Home“. For the following batch of songs, Turner swaps his acoustic guitar for a shiny white electric Gibson, but not without messing around playing some Metallica riffs. Again, the sing-along bits in “Josephine” make sure there is enough interaction with the audience. 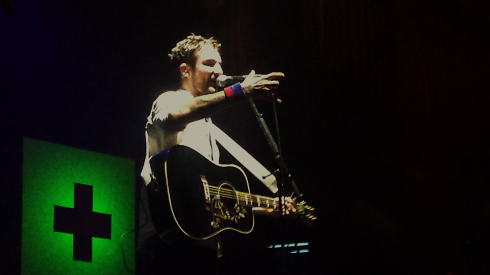 After the folky “The Opening Act of Spring“, the Sleeping Souls leave the stage for Frank Turner to play some songs solo. “St. Christopher is Coming Home” is performed without any other sound then people singing along. Even during the more woeful “Telltale Signs” everyone listens with the greatest intent.

Turner’s backing band rejoins him after fan favourite “The Ballad of Me and My Friends” to play some more songs together. After the Springsteen-esque Mittens (including sing-alongs) they fire up the tempo with the alternative version of “Long Live The Queen“, which causes the first moshpit of the evening to emerge. Frank keeps that energy going through the piano-infused punk track “Out of Breath“.

The running gag during Photosynthesis continues today as well, and everyone sits down at the bridge even though the lyrics say “I won't sit down“. This is the only moment of rest during the last part of the set, as “Plain Sailing Weather“, “Get Better” and “Recovery” sweep everyone up again.

Turner starts the encore by telling the story behind his song “The Angel Islington“, which is a message of hope. That is how he ends his set in Utrecht too, with songs full of hope. After “The Way I Tend to Be“, the gig ends with “I Still Believe” and “Four Simple Words“, with Turner jumping in the crowd at the latter to crowdsurf. Ultimately, to leave the audience ecstatic, sweaty and still hungry for more. No way to have a better first show of the year.

This entry was posted on Tuesday, January 12th, 2016 at 12:51 AM and tagged with Frank Turner, Skinny Lister, The Sleeping Souls, TivoliVredenburg, Utrecht, Will Varley, Xtra Mile, Xtra Mile Recordings and posted in Live, Reviews. You can follow any responses to this entry through the RSS 2.0 feed.
« The Matchup new EP “Cool Your Djent” out today
Northcote covers Beach Slang and John Moreland »