British busker Beans on Toast has released a new video of a new song of a new album. Listen to and watch “The Great American Novel” below.

Jay McAllister, the man under the moniker, will be releasing his new album “Rolling up The Hill” as usual on his birthday, December 1. The pre-order is already up through Xtra Mile Recordings, available here.

“Rolling up The Hill” is the successor to “The Grand Scheme of Things”, that came out only a year ago on December 1. 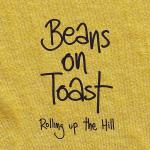 1. The Mudhills Crew
2. Robin Hood Costume
3. I’m Home When You Hold Me
4. The Great American Novel
5. Driving Me Crazy
6. The Industrial Estate
7. God Is A Cartoonist
8. The Art Of Friendship
9. Afrikaburn
10. Number And Words
11. A Bit More Track In The Moniter
12. Middleageman

Beans on Toast on:

This entry was posted on Tuesday, October 6th, 2015 at 10:55 AM and tagged with Beans on Toast, Jay McAllister, Rolling up the Hill, The Grand Scheme of Things, The Great American Novel, Xtra Mile and posted in Music, News. You can follow any responses to this entry through the RSS 2.0 feed.
« State Champs release acoustic title track of new album
Yotam (Useless ID) streams tribute song “Tony Sly” »